Last week, I received an email from Discogs, notifying me that an item on my “wishlist” was for sale. I immediately knew what it was, as there’s only one record currently on that list. Though I’ve had a vinyl collection for as long as I can remember, I’ve only been collecting seriously for about a year. In that time, I’ve picked up many of my favorite albums, some as reissues, and many in early – or even first – pressings. Since I’m still relatively new to the active pursuit of records, I’ve mostly taken a “get it as I find it” approach to collecting – content to pick up albums as I find them in the (many) great record shops in the Portland metro area. Therefore, my Discogs wishlist remains nearly nonexistent.

The lone exception is a 2002 compilation by a Santa Barbara garage band from the mid-sixties called The Dovers. We’re Not Just Anybody collects the eight songs that the group recorded from 1965-1966 – and released as singles on the tiny Miramar Records label. Unlike those original singles, We’re Not Just Anybody isn’t an exceedingly rare item, it’s just that when copies get listed on Discogs, it’s usually by a European seller, meaning that there will be a $20+ shipping cost on top of a $40-50 record. Last week’s notification was from an American seller, but by the time I was able to act on it, someone else had jumped on it first, and so, I continue to wait.

Fans of 1960s garage bands tend to be familiar with The Dovers. Several of their tracks have landed on garage compilations, such as the Pebbles series. Their best-known song, “What Am I Going To Do,” appeared on the expanded 1998 box set version of the beloved 1972 Nuggets compilation. Nestled among scuzzy Stones knock-offs and nascent punk sides, “What Am I Going To Do” is a breath of fresh air – practically ethereal in comparison to what surrounds it. Led by a simple 12-string guitar riff, and punctuated by a (Wurlitzer?) organ embellishment, it is easily one of the most appealing songs on a truly indispensable set.

As any fan of Nuggets knows, digging deeper into the catalogs of the featured bands is a fascinating, often-rewarding, sometimes frustrating, and potentially expensive hobby. The compilers at Rhino Records generally did an admirable job of highlighting the best work from each group, and – more often than not – further exploration can quickly lead to diminishing returns. Even still, the uniquely atmospheric sound of “What Am I Going To Do” makes The Dovers a particularly intriguing candidate for a deeper look.

The band that would become The Dovers began in the early sixties as The Vandells, with Santa Barbara teens Bruce Clawson (guitar), Tony “Goosey” Rivas (saxophone), and Rick Morinini (drums) playing instrumentals at parties and school dances. By 1964, they had been joined by Tim Granada (vocals, rhythm guitar) and Robbie Ladewig (bass), the latter of whom convinced a friend, Tony Cary, to act as the group’s manager/producer. It was Cary who chose the name The Dovers, suggesting that its “British” sound would play well in the wake of the British Invasion.

The Dovers became a recording act in the summer of 1965, booking a session at the famed Gold Star Studios, where Phil Spector and Brian Wilson – among many others – had produced some of the most successful singles of the era. Among the songs that they recorded in that first session were the pair that would be released as their first single: “She’s Gone” and “What Am I Going To Do.” That single would be released on Tony Cary’s Miramar Records in September 1965.

Anchored by the steady drumming of Morinini – who was still in high school at the time – “She’s Gone” has a decidedly surf-y sound. Written by Clawson, the track takes advantage of Gold Star’s legendary echo chambers, creating a spaciously dark atmosphere that stood in stark contrast to the “dry” sound of most garage rock, circa 1965. Thanks to some help from Cary’s connections to local radio deejays, “She’s Gone” became something of a minor regional hit in the Los Angeles area.

While it was “She’s Gone” that gained The Dovers some exposure on local radio, it’s the song’s B-side that remains the group’s most endearing track. Clawson’s 12-string riff forms the backbone of “What Am I Going To Do,” but it’s Tim Granada’s lead vocals, and Tony Rivas’ high harmonies that truly elevate the song into the pantheon of sixties garage rock classics. Few tracks of the decade are so plaintively innocent, and almost none are so perfect.

Late 1965 saw the release of The Dovers’ second single, “I Could Be Happy” b/w “People Ask Me Why.” The A-side is my “runner-up” favorite Dovers track, again highlighted by Clawson’s 12-string guitar and Granada and Rivas’ harmonized vocals. While it’s tempting to call it Byrds-ian, it’s worth noting that The Byrds had only just released their first album a few months prior, and that both bands had effectively grown out of the same Los Angeles-area scene.

The B-side, “People Ask Me Why,” was the most downbeat song in The Dovers’ catalog to date. The 12-string again dominates this moody track, and while it doesn’t stand among their very best work, “People Ask Me Why” shows that even the band’s “B-material” had considerable depth.

While the group’s second single was initially released on Miramar in November 1965, it was picked up by Reprise Records the following month. Though the chance at wider distribution seemed to provide the potential for The Dovers’ breakthrough, success proved to be elusive, and the band was beginning to fall apart.

Early 1966 saw The Dovers undergoing a significant lineup change, as both Rivas and Morinini left the group. The other members and Tony Cary had begun using LSD, and a rift developed within the band. This division was also reflected in their new music. In fact, it was during an LSD trip that Bruce Clawson began writing what would become the a-side to the group’s third single.

Released in April 1966 – exclusively on Miramar, as Reprise had apparently lost interest – “The Third Eye” represented a new sound for The Dovers. Inspired by Ravi Shankar, the song is easily the most psychedelic entry in the band’s catalog. While both The Kinks (“See My Friends”) and The Beatles (“Norwegian Wood”) had already dabbled with Indian raga sounds in 1965, “The Third Eye” managed to incorporate that influence into a heavy rock track, with Clawson’s manic guitar phrases and crashing drums, courtesy of new member Randy Busby. Its closest comparison is The Byrds’ classic, “Eight Miles High,” which was, incidentally, released just weeks prior.

B-side, “Your Love,” was nowhere near as “far out” as “The Third Eye.” More reminiscent of the band’s 1965 tracks, it’s another simple pop song that features Clawson’s jangly 12-string Rickenbacker. As was the case with “People Ask Me Why,” it provides proof that The Dovers certainly could have compiled a full album worth of strong tunes, without resorting to “filler” or by-the-numbers readings of rock-and-roll classics, as so many of their garage contemporaries did when presented with the opportunity to record a full-length LP.

The fourth, and final, single released by The Dovers was led by “She’s Not Just Anybody.” Written by Tim Granada, the track is one of the band’s best. Bruce Clawson’s jangly 12-string lead and Robbie Ladewig’s fuzz bass make for a perfectly-complementary pairing, and the crashing instrumental break is arguably the most exciting moment in their small catalog.

B-side, “About Me,” is one of the band’s low-key moments, but it’s another effective track that features Clawson’s ringing harmonic guitar work, and Granada’s signature quavering vocals.

By mid-1966, The Dovers had lost almost all of their momentum. Robbie Ladewig and Tony Cary had turned to harder drugs, and rehearsals became less productive. Bruce Clawson, whose guitar work had provided the jangly charm to the band’s songs, was kicked out of the group that summer, replaced by Nick Hoffman, who stayed with the band during its final dwindling months. No record of The Dovers exists beyond 1966, and the band’s members would remain completely anonymous, at least in the music world.

The Dovers would earn a second life as their songs began appearing on garage rock compilations in the seventies and eighties, but it was their appearance on Nuggets in 1998 that grew their legend the most. “What Am I Going To Do” became a mixtape/playlist favorite among garage aficionados, and revived interest in the band’s music led the small Italian label Misty Lane Records to release their entire catalog as We’re Not Just Anybody in 2002.

Despite their eventual cult success, the story of The Dovers remains virtually unknown to even those familiar with their music. Like countless other short-lived garage bands of their day, the members of the group went on with their lives, away from music. Precious few scraps of their biography exist online, but the music lives on regardless.

Listening to the band’s entire recorded output takes less than twenty minutes. All eight of their songs are excellent, and no fewer than five are legitimately great. One of them – “What Am I Going To Do” – is an all-timer. I’d strongly recommend that you give this mostly-forgotten group of Santa Barbara teenagers a chance. Just don’t grab the next available copy of We’re Not Just Anybody before I get to it. 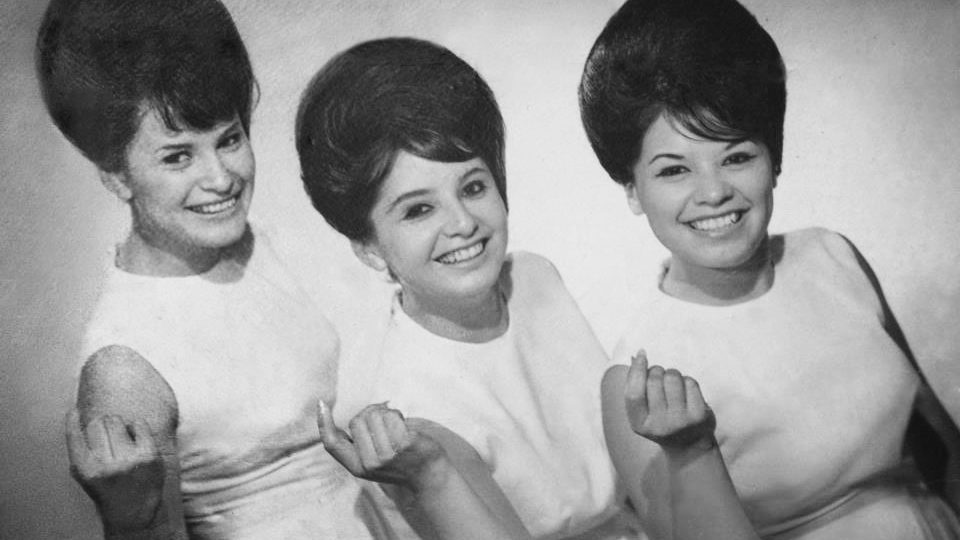 On Distant Stations: The Rev-Lons 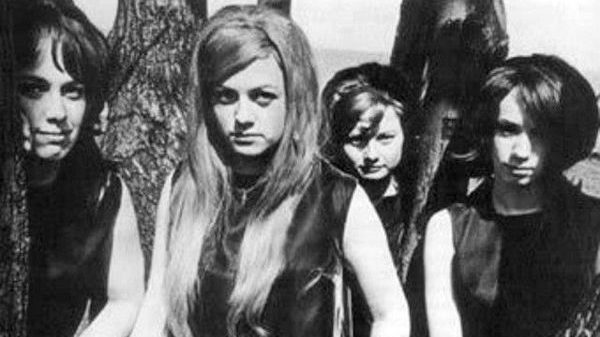 On Distant Stations: The Luv’d Ones

2 thoughts on “On Distant Stations: The Dovers”