In my previous On Distant Stations article on The Dovers, I extolled the virtues of the Nuggets box set. Not only is Rhino’s 1998 expanded release essential listening for any fan of American garage rock, it spawned an equally great sequel – the 2001 Original Artyfacts From the British Empire and Beyond, which focused on the sixties garage rock scene outside of the United States. While both sets are remarkable collections of music, they make one critical error: essentially, the Nuggets box sets present garage rock as a exclusively male phenomenon.

Perhaps in recognition of this shortcoming, Rhino issued One Kiss Can Lead to Another: Girl Group Sounds Lost and Found in 2005. Though this set largely focused on pop artists, it did manage to include a few tracks from legitimate “girl bands”, including a relatively unknown group from Niles, Michigan called The Luv’d Ones. Their track, “Up Down Sue,” represents a stark contrast from the more polished sounds found throughout the set, and could have easily found a home on the male-dominated Nuggets.

“Up Down Sue” was the A-side to one of the four singles that The Luv’d Ones released in 1966, but the group’s beginnings trace back to 1964, when Char Vinnedge (guitar, lead vocals) formed The Tremolons with her sister Chris (bass), Mary Gallagher (rhythm guitar), and Faith Orem (drums). The Tremolons would release two singles in 1965, including Vinnedge’s original composition, “Please Let Me Know.”

The novelty of an all-female group was apparently not lost on Wildwood Records, the tiny Benton Harbor, Michigan label that released The Tremolons’ two singles. Each of their four sides included a description that prominently displayed “All Girl Combo” under the band’s name. This “qualifier” would follow the group for the rest of their career together, forcing them to win over the sometimes-hostile crowds that they encountered.

In 1965, The Tremolons changed their name to The Luv’d Ones, on the suggestion of someone at their new label, Dunwich Records. By this point, Char Vinnedge had firmly established herself as the leader of the group – writing all of the band’s songs, booking their shows and touring arrangements, designing artwork, and even driving the group’s van from gig to gig. Both Vinnedge’s talent and ambition left a lasting impression on everyone who saw her in action.

The Luv’d Ones had a much different sound than they had as The Tremolons – tapping into the garage rock stylings that thousands of other young American bands were exploring in the wake of the British Invasion. Vinnedge partially established her unique guitar tone by tuning her Gibson SG down a full step – gaining a “deeper” sound that matched her alto voice – and by embracing feedback and fuzz.

The Luv’d Ones would release four singles (with seven unique tracks) in 1966. Three were issued by Dunwich and one was released on the White Oak label. No specific dates appear online, but analyzing the Dunwich catalog numbers seems to be a reasonable way to guess their release order. The White Oak A-side – the aforementioned “Up Down Sue” – is arguably the group’s best-known track, so we’ll begin there.

“Up Down Sue” announces itself with a blast of guitar, which leads into a rumbling low-end heavy track. Char Vinnedge’s vocals are complemented by harmonies from her sister Chris and Mary Gallagher. It’s a simple track, but like many of the fuzzier moments on Nuggets, “Up Down Sue” finds the DIY ethos of punk rock fully intact, a decade before the term was being used. While The Luv’d Ones weren’t the first all-female rock band, none of their predecessors created music that fit in so seamlessly with their male garage rock counterparts.

The B-side to the group’s White Oak single is the Beatlesque “Yeah, I’m Feeling Fine.” Like countless other young Americans, Char Vinnedge was a devout Beatle fan, and The Luv’d Ones would frequently incorporate Lennon/McCartney songs into their live repertoire. Their familiarity with Beatle-y chord changes and harmonies are readily apparent on this track.

The Luv’d Ones’ (presumable) first single for Dunwich was “I’m Leaving You” b/w “Walkin’ the Dog.” The A-side is far more interesting than the highly-competent cover of the Rufus Thomas song that appears on the flip side, but both show the impressive bass playing of Chris Vinnedge. While Char understandably tends to get most of the credit for the group’s material, the talents of her bandmates should be more than a footnote in the story of The Luv’d Ones. “I’m Leaving You” would reappear as the B-side of the band’s final Dunwich single.

The second single that the group released for Dunwich featured Char Vinnedge’s most “atmospheric” track, “Stand Tall,” on its A-side. It’s a low-key song that abandons the heavier sound of the group’s earlier singles, and emphasizes their impressively interweaving vocal harmonies.

The B-side to “Stand Tall” is the similarly downbeat “Come Back.” Like its predecessor, “Come Back” features excellent harmonies from the group, and while it’s not surprising that this pair of comparatively gloomy tracks didn’t exactly burn up the charts in 1966, they would have made for impressive album material in a time when many garage bands were still heavily-reliant on unimaginative covers of rock-and-roll classics to fill out their LPs.

The A-side to the band’s final Dunwich release is arguably their greatest track. “Dance Kid Dance” matches the darker sound of their previous single with their most impressive lyrical statement. Essentially a protest song against the escalating war in Vietnam, “Dance Kid Dance” is ominous and foreboding in both its sound and subject matter. There’s no good reason why it shouldn’t be one of the better-known exemplars of sixties garage rock.

The Luv’d Ones’ affiliation with Dunwich appeared to have run its course by the end of 1966. While the band would stay intact until 1968, their label apparently had other priorities. Char Vinnedge continued to tirelessly plot out a new direction for the group, but her commitment to the project far outpaced that of her bandmates. Vinnedge would continue to hone her guitar playing skills – eventually working with Band of Gypsy’s alum Billy Cox on the 1972 album Nitro Function – but by the mid-seventies, she had left the musical world behind.

The Luv’d Ones’ catalog would be reissued in 1999, on the Sundazed compilation Truth Gotta Stand. Collecting each of the group’s singles, and over forty minutes of post-1966 demos – several of which are excellent, and all worthy of a listen – Truth Gotta Stand displays the talents of a group that never seemed to get a fair shake. While there were hundreds – if not thousands – of similarly-talented sixties garage bands that never made it big, it’s hard not to wonder what role gender played in the story of The Luv’d Ones. The music industry was still intensely male-dominated in the mid-sixties, and attitudes toward women musicians and songwriters were far from enlightened, to say the least.

It’s always a little bittersweet to see a once-forgotten band find a small degree of after-the-fact recognition, but in the case of an artist as talented and determined as Char Vinnedge – who died of a heart attack in 1997, shortly after The Luv’d Ones were signed to Sundazed to release Truth Gotta Stand – it’s particularly tragic. Take some time to get to know this excellent band. It’s never too late. 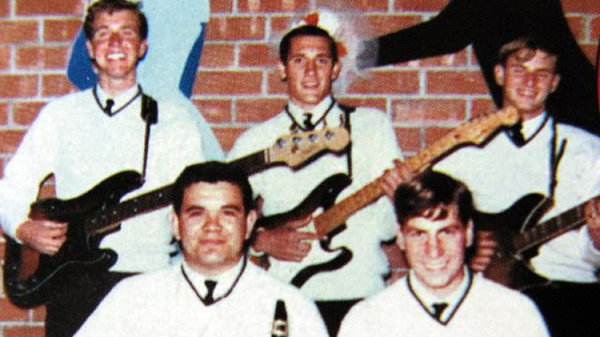 On Distant Stations: The Dovers

On Distant Stations: The Rev-Lons